During the weekend no less than four battles, a warrior tournament, the crowning of this year's Skald (poet/entertainer) and a grand feast will all take place.

Everything you need to know about the When, the Why and the How. Tour the one stop information board. »

Don't miss our event of the year! Help us to once and for all settle if Hisingen is part of Gothenburg... or not.»

Battle, Tournament, Feast and Entertainment.. Make sure you are up to date on this years Battle of Hisingen. »

Read the general rules as well as the detailed rules regarding weapons and hit zones used during this event. »

Our vision is to create an annual Viking event for warriors in northern Europe. The event goal is to evolve the strategic element in battle and give the participating warriors a challenging and fun weekend. This event is for the warriors and not the spectators. 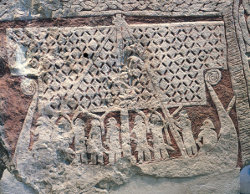 Harald Hardrada, the last great Viking king in Scandinavia, fell at the battle of Standford Bridge in 1066 during an attempt to conquer England. Before this he had demonstrated his power against local chieftains and farmers in Norway. The sagas tell of how he cowed the farmers of Hisingen with his power during one of his many military campaigns – an unconfirmed tale among many others. After Haralds death Sven Estridsson ruled as king in Denmark and became progenitor of a new line of kings in this country. The border between these two kingdoms in western Scandinavia was now set to Götaälv. The river formed a natural border with as few possibilities for border feuds as one could ask for. When at war the attack came by sea, at land any hostilities was kept to a minimal by the big forest bordering to Götaland, which pressed the coastal zone between Fjärre in Halland and the great river into a thin corridor.

Due to their domination at sea the Norwegian kings could claim the easy sailed waters at Skagerak and they also secured their grip on the important northern outlet of Götaälv, between Inland and Hisingen. (Ref. Bohusläns Historia, Almqvist och Wiksell förlag).

The following competitions will occur during the weekend:

Four Battles. The two chieftains will lead one army each, one Norwegian and the other Danish. These countries were the major forces in the area during the Viking age. The winner is declared after four strategic battles in challenging terrain. A number of strategic aspects, that usually play a large part in our fighting style, will greatly impact who stands as final victor. It will be important to use the terrain well to save the lives of one’s warriors; these will be needed to control the area after the battle is ended. We will use missile weapons to a greater extent than usual and fight in a very mixed terrain. The victor will be crowned Chieftain of Hisingen until next year when a new chieftain will take his place.

Warrior tournament. During Saturday afternoon the greatest warrior of Hisingen will be crowned. This will be done by an elimination tournament in which every combat is decided by the best of three rounds. Signups for the tournament will be handled on site. A simple lottery decides who fights who.

Skald of the year. During the evening feast a person or group can compete for the title of skald of the year. This is done by performing an act of entertainment in relation to the Viking age. This could be a showfight, a poem, a song, music or dance. The audience will decide the winner.

Re-live days gone by and the past glory of Battle of Hisingen 2011. »

Third time's the charm, the 2013 incarnation of Battle of Hisingen. »